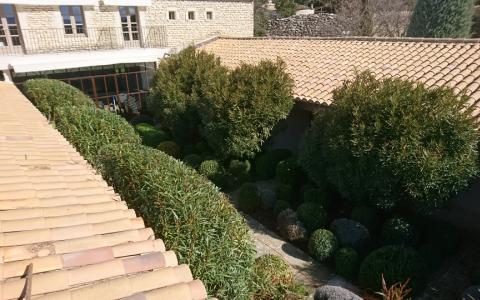 It is time to take care of the oleanders on the Patio.

Such is the choice of Jas de Gordes gardener Alexandre. Upon closing the hotel, late October, he cuts dead flowers and a few branches. That’s all. To leave them this way prevents the trees to frost.

It is in March, just before the hotel opening, that he prunes them. It allows plant growth and regular blooming.

It is quite impressive and worrisome to see him climb the roof to give the trees a “crew cut”  but the result in mid-April is striking !