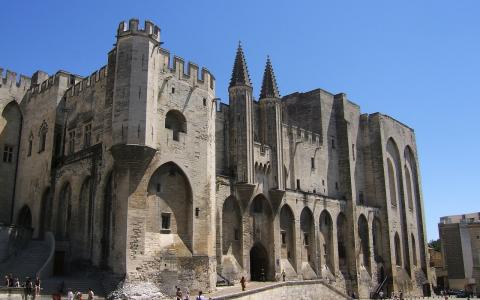 Against the magnificent skyline of the Vaucluse sits Avignon and it is here that you can find the “Palais des Papes”, a magnificent palace which since 1995 has been named “World Heritage Site” by UNESCO along with the historical center of Avignon.

The “Palais des Papes” is an example of the catholic faith’s might and influence back in the 14thC. Construction began back in 1252 and became the Pope’s residence from 1309 under Pope Clement V. Under Pope Benedict XII (1334-42) a major reconstruction of the palace began and continued through to his successor Clement VI, the palace occupies an area 11,000m² and is the largest Gothic palace in Europe.

The popes left Avignon to return to Rome in 1377 though it remained home to the “anti-popes” Clement VII and Benedict XIII until 1403.

Over the next few hundred years it fell into decay despite some renovation in 1516 and was used as a prison by the Napoleonic regime. During the Third Republic many frescoes were painted over and destroyed but despite this some frescoes painted by Matteo Giovannetti can still be found here.

The palace was finally vacated in 1906 and became a national museum. Today it is one of the most visited tourist attractions in France and each year during the summer some major art displays are exhibited inside its walls along with performances from the “Festival d’Avignon” being held in its courtyard during the month of July each year.