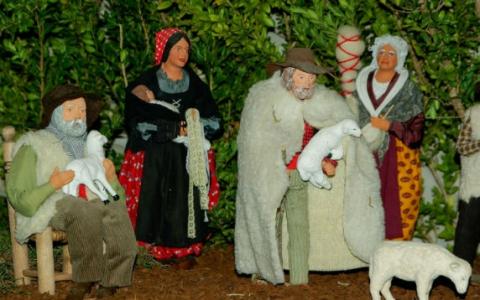 Following the revolution, the National Assembly decided to close all churches in 1793. The clergy had a strong influence on the population and this prevented many new laws being made. This therefore meant that the population was denied the Christmas crèche which up until then belonged to the church.

As the population was very religious they started to create their own homemade « crèche » even though this was banned at the time, and this is how the santon begun its existence in Provence (Santoun in provençal).

These little figurines were originally made from bread crumbs and paper and then later in clay. In time they were painted and then clothed using tissues.

As well as the Nativity family, the figurines in the crèche also represent ancient trades, village people and animals.

Today the santon has become a Provençal tradition, there even exists a trade as a santon maker and the “Santon Museum” is in Fontaine de Vaucluse, just a few kilometers from Gordes, where you can discover a large collection of antique and contemporary pieces.